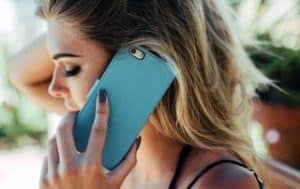 Ever since I started learning about RF (radio frequency) Radiation and its harmful effects, I have heard about the SafeSleeve brand of radiation blocking cellphone cases. They work kind of like the lead vest your dentist lays over you when they x-ray your teeth, except they use metallic strand fibers, rather than lead. And it is important to remember some RF Radiation can come around the case; it is not perfect protection.

SafeSleeve Radiation cell phone cases block RF Radiation by using a cloth interwoven with highly conductive metallic fibers. This is sown into the front flap of the case, which is the side that you would hold up to your head. RF Radiation does not pass through parallel lines of conductive metal very well. This material blocks about 99 percent of the RF Radiation from going straight through it. Some radiation will still go around the case, but it will block most of it.

Any metal mesh screen or fabric with metal fibers woven into the fabric, will work to block RF Radiation, as long as the metal used is highly conductive. So when you get into quality differences between radiation protection cases, besides the quality and design of the case itself, the most important part is how conductive the metal used in the fabric or metal mesh screen is.

Why Only The Front Flap?

How Much Radiation Comes Around The Case

This is difficult to answer. It depends on how you hold your phone. The more square you hold the phone to your head, the less that will come around. The more you tilt the phone, the more will escape around. The thing to focus on is it blocks a lot of the radiation. It is definitely worth using. It is so much better for you than not having any protection at all.

But this is why I recommend a well rounded approach. The SafeSleeve case, or a phone case of equal quality, is a vital part of protecting yourself. But you also need other tools like an air tube headset, a ferrte bead, a WaveCage and so on. See my full recommendations on how to fully protect yourself from cellphone radiation on the “Cellphone Radiation Protection Items” page of this website.

In the below video I test a bunch of EMF protection cell phone cases. Take a look and see how well the SafeSleeve faired along side their competition: 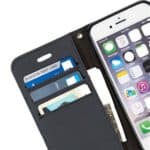 As you can see from the image above and the image on the right, SafeSleeve Cases are good looking cellphone cases. The material used to block RF Radiation also gives very good RFID protection so that you can put credit cards and the like in the slots in the case.

These are the quality of cases that people will be asking you where you got them strictly based on the look and the style, before they even know that they also protect you from RF Radiation.

As you can see also from the image, it has a slot for cash as well. The case literally can be used as a light wallet as well as a cellphone case. 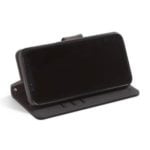 I call this the Cellphone TV Stand, because I use it like that. I love this feature because it makes my cellphone very easy to use as a stand to hold my cellphone just perfect for watching Netflix, Hulu or YouTube videos.

No more trying to lean your cellphone up against something so that you can watch your shows hands free. The SafeSleeve case turns your phone into a mini TV you can watch hands free!

The below video is a great introduction to these cases done by SafeSleeve themselves:

The majority of the most effective products and blocking or shielding us from RF Radiation, do so using the very same principles used in the design of the SafeSleeve cases. Parallel lines of highly conductive metal typically block at least 95% of the RF Radiation. The metallic fabric used in SafeSleeve cases do even better. They block 99% of this radiation. All you have to worry about is the RF Radiation that escapes around the shield. So it is highly effective.

There are literally hundreds of peer reviewed scientific studies linking RF Radiation to a host of ailments. Cancer is the most common mentioned. Other things like DNA damage, especially in infants and fetuses, crib death and infertility are a few more. To read some of these studies for your self I have links to some of them on the “scientific studies” page of this website. Even the World Health Organization was finally forced to classify RF Radiation as a possible “carcinogenic”, which means “cancer causing”. 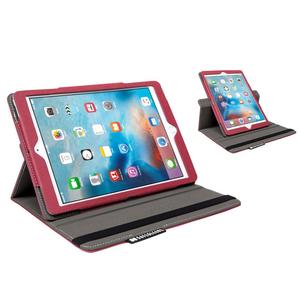 Using the exact same technology, the people at SafeSleeve.com have designed a very attractive and sleek looking radiation protection case. It is called the SafeSleeve Tablet Case. Like the cellphone cases, people often are attracted to them for their style even before knowing about the RF Radiation protection.

They have cases to fit any model of Ipad or Android tablet. If you click on the link to their website I put in the above paragraph, you can see all of the various options they give you

And as you can see from the picture on the above right as well, the case doubles as a TV or work stand holding the tablet in either portrait or landscape position. I have seen a lot of the radiation protection cases out their for tablets, and few are a stylish or quality as the Safesleeve ones. I apologize for sounding a bit like a commercial, but they are the best I have seen.

The below video is a great little video done by Safesleeve to show you the protections and features of the Tablet Case. It is definitely worth watching. I recommend it. 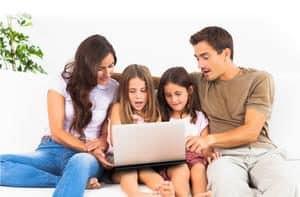 Most laptop manufacturers are moving away from calling their computers “laptops” because of how well it is becoming known that computers emit harmful radiation. They are calling them things like “portable” or “notebook” computers.

Nowadays the need protection from this radiation is at an all time high. Almost everyone now has laptop computers, tablets and cellphones.

SafeSleeve has both a radiation protection case, as well as a sturdy protection platform it calls a Lap Desk. The SafeSleeve Lap Desk & Case makes it really easy to set the laptop on your lap without exposing yourself to near the amount of RF Radiation you otherwise would. Just like the other cases it blocks over 99% of the radiation from going through it. All you have to worry about is the radiation that sneaks around it.

The below video is a great little video done by Safesleeve to show you the protections and features of the Lap Desk and Case. It is definitely worth watching. I recommend it. 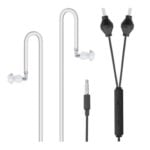 The SafeSleeve Air Tube Headset is a premier high quality unit in the air tube headset world. With an air tube headset the RF Radiation that would normally be traveling up the cord and into your ears get stopped about half way from the phone to your head.

High quality mini speakers are placed here, and from that point on flexible plastic tubes extend the rest of the way from the mini speakers up to your ears. An air tube headset functions similar to a stethoscope.

The most vulnerable part of the human body to RF Radiation is the human brain, this is why air tube headsets are so important. However there is still the problem of the RF Radiation traveling up the cord to the speakers. This means at least 50% to 60% of the cord is basically an RF Radiation antenna. And since this often leans against our body, it is important to reduce the amount of RF Radiation there as well.

Importance Of The Ferrite Bead

This is where the ferrite bead comes in. Safesleeve does not sell a ferrite bead. However you can get great Ferrite Beads for next to nothing on Amazon.com. On the above left is a picture I snapped of my ferrite bead I got from Amazon on the base of my headset.

A ferrite bead is a technology that has been around a long time. It is used currently all the time. In the above right picture you can see a ferrite bead that is placed on the cord of a laptop charger put there to protect the laptop from high frequency spikes and surges.

A ferrite bead placed on your headset cord will do the same thing for it. It will stop 95% of the high frequency RF Radiation spikes and surges from traveling up the cord and into your body. It will allow only the normal low frequency electricity through that is needed to run your headset speakers. 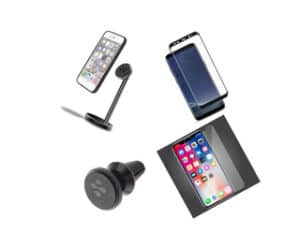 On the accessories page SafeSleeve.com sells things like a Magnetic Car Mount. This is designed for you to be able to attach your cellphone to your dashboard for using it as a hands free speaker phone or for when you are using the GPS. I have not actually gotten one of these but on their website it does look to be good quality.

They also sell a Magnetic Desk Mount. I could see how this could be handy, however I would not want to use if very much because then you have no protection from the RF Radiation. This is because you have to take it out of the case to use it. I prefer to keep my cellphone in a WaveCage while sitting on my desk. That way my phone still gets signal, and can ring. But the WaveCage blocks 95% of the RF Radiation emitted in all directions while the phone is in it.

They also sell several different types of screen protectors. They have them for quite a variety of different cellphone models. If you do not see your type of cellphone model listed there I would recommend emailing them and asking them if they have it.

So in conclusion I have to say that out of all of the protection case companies that I have studied and tested out their products, SafeSleeve is by far my favorite. I have seen others of equal quality but they work both more expensive, and their quality service was poor.

Related articles “Aulterra EMF Neutralizer Products Review” and “Belly Armor by RadiaShield® Product Review“. Also for more information on other sources of RF Radiation in your home please see my article “The 7 Worst Radiation Dangers In Your Home“.