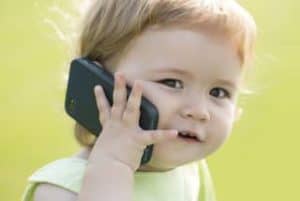 It is commonplace to see babies and toddlers playing on cell phones, with no thought by the parent that they are exposing the child to harmful Radio Frequency (RF) Radiation. It has become a simple way to entertain children, by letting them watch cartoons on a cell phone.

Scientific studies show that cell phone radiation causes the most harm to infants and fetuses. The DNA damage (such as unwinding) caused by cell phone radiation, affects babies and fetuses the most. There are literally many hundreds of independent peer reviewed studies that show links to this as well as things like cancer, sleep disorders, crib death, tinnitus, and infertility.

The good news is there are some things you can do to protect yourself and your loved ones from cell phone radiation. I talk about this in detail in my “How To Protect Yourself From Cellphone Radiation” article.

In the video below I test a cell phone so that you can see how much radiation they actually emit.  The video will also show you some of these ways to protect you and your babies from RF Radiation. It is short and definitely worth watching.

Cell phone radiation and its effects on children have been the topic of great debate for decades.  A new government study however is putting this major debate into the national spotlight and forcing parents and doctors to take notice.  For the past couple of years, scientists at the U.S. National Institute of Health Toxicology Program have been studying the effects of cell phone radiation in rats and mice.

In 2016, scientists released a portion of their findings and it made headlines around the world.  According to the landmark study, scientists found a direct correlation between cell phone radiation and tumor growth.  Tumors?!?! Yep. Let’s take a closer look at the study.  The report indicates rats and mice were exposed to the same level of radiation humans are exposed to in every day. Here’s an excerpt from that very study:

“For the studies, rats and mice were exposed to frequencies and modulations currently used in cellular communications in the United States. The rodents were exposed for 10-minute on, 10-minute off increments, totaling just over 9 hours a day from before birth through 2 years of age….NTP found low incidences of tumors in the brains and hearts of male rats, but not in female rats. Studies in mice are continuing.” National Toxicology Program.

Did you catch that? The study indicates a rise in tumors in the brain and heart of the male animals. Scary stuff.  So, what does that mean for kids and babies? Great question.  The truth is we need to be concerned.  The $25 million study was quickly picked up by news organizations around the world. The significant findings were published in the prestigious journal, Scientific American, CNN and The New York Times.

“The trend here is important. The question is ‘Should one be concerned’? The answer is clearly “Yes,” said David Carpenter, Director of the Institute of Health and Environment at the University of Albany.

Okay.  So there’s a correlation between low level radiation exposure and tumors in animals.   But, how does that research translate to the real world? How does radiation impact my child? All great questions that are better left to the experts.  Good news for you, there are a lot of doctors, scientists who believe there is no safe level of radiation for a child.

Center for Disease Control and Prevention

To understand the health effects of radiation we need to first take a look at how cell phones work.  Of course, you know how to operate a phone.  But, do you really know the type of energy required to call your husband, search for a birthday present or send a text to your best friend in the middle of the night? Here’s a great explanation from the Center for Disease Control and Prevention:

“Cell phones and cordless phones use radio frequency radiation (RF) to send signals. RF is different from other types of radiation (like x-rays) that we know can be harmful. We don’t know for sure if RF radiation from cell phones can cause health problems years later. The International Agency for Research on Cancer (IARC) has classified RF radiation as a “possible human carcinogen.” (A carcinogen is an agent that causes cancer.)” –CDC

To be mobile and oh-so-convenient cell phones are equipped with tiny antennas.  Those antennas send signals to area cell towers to make it possible to send and receive data.  All that back and forth, takes energy.  Still following? All that energy emits radiation.  Some reports indicate the “safe level” of cell radiation was modeled off a grown 200 lb man in the 1980’s.  Not, off a child with a developing skull.  So where does all that radiation go? The invisible wave lengths, become absorbed into everything around the source, including your body!  Possible side effects of cell phone radiation exposure include: brain tumors, fatigue, headaches, increased heart rate and other cancers.

During my research, I stumbled upon an eye-opening article about kids and cell phones.  The article featured in Total Health Magazine and authored by Dr. Ann Louise Gittleman, highlights the need to take all precautions when it comes to cell phones, babies and children.  Here are a few excerpts that really caught my attention:

“A startling Swedish study shows that young people are five times more likely to get brain tumors if they use a cell phone before they’re 20. Other research finds that a mobile phone call lasting just two minutes can produce brain hyperactivity that lasts an hour in kids.  Even cordless phones emit dangerous radiation that can almost double heart rate variability and affect the autonomic nervous system, causing anxiety, blood pressure changes, fatigue, dizziness or fainting, and sleep disturbances, a new investigation in the European Journal of Oncology reports.

The article does a fantastic job explaining why kids are more at risk than adults when it comes to radiation emitted from cell phones: “The problem is children’s brains absorb twice as much radiation from these phones as adult brains. Not only do youngsters have thinner skulls and smaller heads than adults, but their brains also continue developing during childhood and adolescence—only increasing their risk.

With kids spending “significant time on mobile phones,” warns David Carpenter, MD, dean of SUNY’s School of Public Health, “we may be facing a public health crisis in an epidemic of brain cancers.” In addition to brain tumors, research suggests cell phones can lead to hearing loss in kids.

As our knowledge stands right now, interaction with fertility, the immune capacity, shattering of DNA, or impaired learning and intelligence will be much more dangerous than the extra cases of cancer,” adds radiation researcher Kerry Crofton, PhD. A growing number of countries—but, unfortunately, not ours—either forbid or discourage mobile phones for anyone under 18.

Testifying before Maine’s Health and Human Services Committee several months ago, Camilla Rees (co-author of Public Health SOS: The Shadow Side of the Wireless Revolution) said, “It is possible society will look back on the unchecked proliferation of radiation-emitting cellular phones—as a crime against humanity.” But to date, only San Francisco requires retailers to post radiation information on mobile phones.”

Read that last part again.  If you didn’t catch it, let me put it in bold: ‘A crime against humanity.” Say what?!? Okay.  That’s it.  Alexa will never be allowed to babysit again.  In all seriousness, this is a public health crisis and our children are most vulnerable.  Did you know in 2011, the World Health Organization changed the classification of cell phone radiation to a possible carcinogenic to humans.

“Tissue heating is the principal mechanism of interaction between radiofrequency energy and the human body. At the frequencies used by mobile phones, most of the energy is absorbed by the skin and other superficial tissues, resulting in negligible temperature rise in the brain or any other organs of the body.” –WHO

While the United States has yet to make laws or restrictions for children and cell phone use, other countries around the world are making extraordinary efforts to keep kids safe from radiation.  An article, by Dr. Ben Kim highlights how various countries are addressing cell phone radiation.

“France is nearing the point where it will make it illegal to market cell phones to children. Russian officials have recommended that children under the age of 18 years not use cell phones at all. Similarly, the United Kingdom, Israel, Belgium, Germany and India have discouraged use of cell phones by children.

In Finland, the Radiation and Nuclear Power Authority has urged parents to err on the side of caution, because despite there being no definitive research indicating health risks related to the use of cell phones, there is also no definitive research indicating the absence of health risks from cell phone use. The truth is, cell phone use, and especially its wide use among children, is a relatively new phenomenon which has not yet enabled study of possible long term effects.” –Dr. Ben Kim

Okay. So what is our government doing to protect our children? A quick glance at the F.C.C website, the governing body for the cell phone industry, and there are only a few quick tips to help keep kids safe:

After a lot of research, it was difficult to find any helpful information about radiation and the health risks to children on the FCC website.  If other countries are taking action against kids and radiation, why isn’t our country following? One thing is clear, it’s up to parents to do independent research like you’re doing right now and try to make the best decisions for your family.

So what’s the solution to the problems of cell phone radiation and babies? How do we safely raise children in a high tech world? Seems like a monumental task, doesn’t it? I know.  It’s going to be tricky.  Some experts warn to begin limiting your cell phone radiation exposure as soon as you’re pregnant and when you’re nursing, if you choose to do so.  Babies are vulnerable and we need to do everything we can to protect them. Once a child is old enough to watch shows and play games, it may be best to put on your creativity hat.

Your cell phone should not be a go-to entertainment source for your little one.  It’s clear based on studies and incredible research, the risks of a child using a cell phone, far outweigh those few moments of silence in the grocery store.  Better yet, next time you run out of toilet paper and taco seasoning, ask for help.  Have grandma or the neighbor swing by for a few hours to babysit.  It’s going to take a cultural shift to change the way we view cell phones and the health risks.  We don’t need Alexa or any other technology to entertain our children, especially if it means they could get sick a few years down the road.  Put the phone down.

Often people live in a home that was not pre-wired with Ethernet cables sending WiFi to each room of the house. And it can be expensive to wire a home after the fact. So unfortunately people end up...

Continue Reading
link to Does Fitbit Emit EMF Radiation?- Get The Facts!