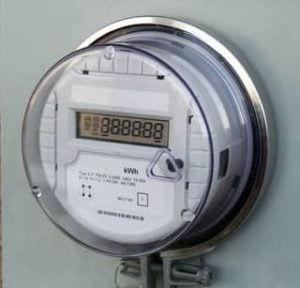 I get asked quite often “are smart meters a good thing or is something wrong with them?” The word is starting to get out now about smart meters and that they are bad. People here little bits and pieces of why, enough to peak their interest, and so they start seeking more complete information.

There are a lot of things wrong with smart meters. First of all like all “smart” devices, they have computers components in them that track data. The power companies know for example what time of day you use how much power, and can even tell when your home is typically empty. Smart meters also are highly toxic because they cause 2 forms of EMF Radiation. First, the signal they use to communicate to the power company is RF (radio frequency) Radiation, and second, they cause the electric lines in the building to emit Dirty Electricity. These have been linked to things like cancer, brain tumors and infertility.

In this article first I am going to touch a bit more on the dangers of smart meters, and I show a video where I test a device you can put on your smart meter to block its RF Radiation. I will discuss why smart meters are a big problem on apartment complexes, and then I show you how to test for Dirty Electricity.

The big sales pitch for smart meters was that they were supposed to help manage the use of our electricity. If the power companies could see more clearly overall consumption trends, they could manage resources better and save the consumer money on their power bill. However at least with some power companies this does not appear to be true. There are many consumers claiming that their power bills actually increased once a smart meter was installed.

There are even lawsuits against power companies by larger power consuming companies claiming increased bills. Giving a power company access to things like how many people are home during what times of the day, when your home is empty, what appliances you use when, and if you have more expensive appliances, seems too intrusive to me.

Dr. Laura Pressley Ph.D., (who has a doctorate in Physical Chemistry and holds four U.S. Patents in semiconductor device technology), says that the average smart meter she has tested emits about 60,000 micro-watts per meter squared of Radio Frequency (RF) Radiation, which is 60 times the U.S. safety limit. In 2011 the World Health Organization classified RF Radiation as a “possible carcinogen“. Carcinogen means “cancer causing”.

And there are hundreds of peer reviewed scientific studies that also link RF Radiation to cancer. I list links to some of these studies in my article “The 7 Worst Radiation Dangers In Your Home“.

In the below video I test the digital meter on my home so that you can see first hand the amount of RF Radiation a digital meter like mine emits. Then I put something called a “Smart Meter Guard” on the meter and measure it again. The Smart Meter Guard reduced the amount of RF Radiation emitted into the air by the meter by 90% to 95%. Yet my power company can still receive its readings. The video is short, but informative. Seeing is believing. It is definitely worth watching.

Smart meters are dangerous. But what most people don’t realize is that there are many other WiFi type items in our homes that are equally as toxic. But there are some very simple items that you can get that will allow you to keep your gadgets, but that will shield you from the majority of the harmful radiation. On the Recommended Protections page of this website I list links to where I believe is the best places to get these protection items like the Smart Meter Guard. 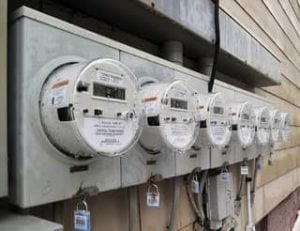 There is one situation that many people are in that needs to be pointed out. It is bad enough to be in a single home that has a smart meter on it. Especially if the meter is on the wall of a bedroom. And in some neighborhoods where houses are very close together, your neighbor’s smart meter might be just a few feet away from your bedroom wall. These situations are problem enough, but again with a mart meter can be resolved rather quickly.

But have you ever seen the outside wall on apartment complexes where there might be twenty smart meters all next to each other on the same wall? The wall that they put those on are usually the wall of someone’s apartment. And sometimes even a bedroom wall. Can you imagine trying to sleep at night with all of that RF Radiation blasting through your bedroom all night long. You would not hear or see anything, but it would be there. A situation like that magnifies the ill affects of smart meter radiation. 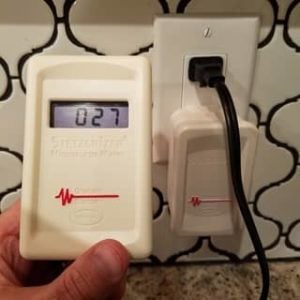 Another way “smart meters cause RF Radiation is by causing the wires in the building to emit “electromagnetic smog” or “dirty electricity”. Dirty electricity is erratic surges and spikes of electrical energy moving along building wiring and power lines where only standard 50/60-Hertz AC electricity should be. It becomes airborne and radiates through the walls into the rooms of buildings. These spikes are of a high enough frequency that they are dangerous to living organisms. It is caused most often by appliances that try to alter the normal flow of alternating electrical current in some way. Since a smart meter is connected to every circuit in the building, all of the wiring in the building is affected. Digital meters like smart meters are the largest cause of dirty electricity in most homes.” 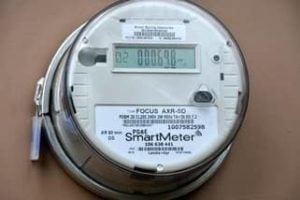 As I said above, smart meters are a high tech way to collect data about how much energy you use in your home.  The idea was supposed to lower power bills for consumers.  It benefits the power company because they no longer have to send someone physically to your home to read your meter. However, smart meters emit radiation 24 hours a day.  You can’t turn it off. The meter is constantly sending pulses of information back and forth to the power company.  Studies show that RF Radiation causes big health problems for families, such as headaches, depression, sleep problems, ADHD and so many more.

And did you know the World Health Organization recently classified cell phone radiation from cell phone as a possible carcinogenic in humans? Yep. Pretty scary st..uff. Here’s an interesting excerpt from an article I found while researching the health affects of smart meter:

“Dr. David Carpenter MD, a graduate of Harvard Medical School and a physician who has worked in the area of electromagnetic fields (EMFs) and public health for over 18 years, has a few choice words for power companies that are forcing smart meters down the throats of their customers all over the United States.

Dr. Carpenter adamantly insists that there is no evidence whatsoever that smart meters are in any way safe for human beings. He goes on to say that there is, in fact, ample evidence that demonstrates “convincingly and consistently” that exposure to radio frequency radiation at elevated levels for long periods of time increases the risk of cancer, damages the nervous system, and adversely affects the reproductive organs. Dr. Carpenter says that an informed person should demand that they be allowed to keep their analog meter,” The Home Health Economist. Again I list links to some of these studies in my article “The 7 Worst Radiation Dangers In Your Home“.

Doctor’s orders. Time to ask your power company if you can opt out of the smart meter program.  In many states, you have the choice between a smart meter or an old school analog meter.  So, it’s clear there are major health risks associated with the smart meters.  But, did you know smart meters are vulnerable to cyber attacks, potentially shutting down the entire power grid and exposing your personal information.

Some security experts warn smart meters could make homeowners vulnerable to home invasions, profiling and other serious issues. And it’s not just a problem here in the United States.  According to an article in the Guardian, a major security watchdog group is expressing big privacy concerns with the new smart meters.

“It said the technology could be used to track what “households do within the privacy of their own homes, whether they are away on holiday or at work, if someone uses a specific medical device or a baby monitor, or how they spend their free time.  It claims the vast amount of information collected by the new generation of devices could have serious consequences for consumers and what they pay for their energy,” The Guardian.

Some experts also believe your personal energy data could be sold to advertising agencies for marketing purposes.

Smart Meters Are Not A Smart Idea

It’s clear, based on research, smart meters are a bad idea.  The high tech devices make our health and personal information vulnerable. There are also reports across the nation of smart meter explosions, causing massive house fires and millions of dollars in damages. According to some reports and public testimony, smart meters suddenly catch fire if a customer is behind on their bill.  Here’s an interesting excerpt from an article about fire and smart meters:

“Pacific Gas and Electric (PG&E) whistleblower Pat Wrigley, who worked as a meter reader for 9 1/2 years testified at California Public Utilities Commission judicial hearing.  He stated:  “Smart meters cause fires” and “PG&E is covering up the risk”. . . PG&E states they are now monitoring temperature and voltage readings of smart meters for hazardous conditions, which proves there’s a problem. If there was no problem they would not need to monitor these conditions,” EMF Safety Network.

There’s has to be another way. And there is.  Opt out of the smart meter program if you can.  If this is an option, you may need to pay a small fee.  If you can’t, purchase smart meter guards, designed to significantly reduce the amount of radiation exposure. You can also make your own guard.  That’ll have to wait until you get back from your dream vacation to Costa Rica.  Until then, have a friend or neighbor turn the lights on.  I’d hate to have you come home to an empty house.

To learn how you can protect your family from the radiation of a smart meter on your home if you can’t get the power company to remove it see Smart Meter Guard Product Review.  To read a review on a meter that will measure the RF radiation coming out of your smart meter please see our article entitled HF-35C High Frequency Analyzer Product Review.