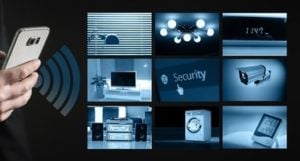 Many people designing the fanciest smart homes have no idea how much RF (radio frequency) Radiation they are exposing their families too. And if they did most would not even know that it was dangerous. They are just focused on the convenience and the cool factor of a smart home.

In this article we are going to talk about the different parts of a smart home system, and where you get RF Radiation emitted and where you don’t. Then we will also talk briefly about ways you can protect yourself from this RF Radiation.

The RF Radiation emitted by smart devices is within the microwave portion of the electromagnetic spectrum, so it is also called microwave radiation. This is the same radiation that your microwave oven uses to cook food. This “non-ionizing” form of radiation has been linked in hundreds of independent peer reviewed scientific studies to things like cancer, brain tumors and infertility.

Smart homes can be designed to connect to each device in the system via wires, rather than wireless. While this still may cause dirty electricity, this is generally less powerful and toxic as wireless RF Radiation. It still needs to be corrected, but we will talk more about how to that later in this article. So it is better to wire them than to connect things wirelessly.  About the only thing that needs to be wireless might be your cellphone & tablets.

Smart systems can communicate over the negative wires in the electrical wiring, or via computer cables wired through the home. It just depends how they set the system up. Some features would have to communicate via computer cables. In this article we are going to discuss the different parts of a smart home, the RF Radiation that it emits, and what alternative wired devices could be used instead.

(Note: Just remember even wired smart devices cause RF Radiation in the home in the form of Dirty Electricity. But Dirty Electricity is more easily protected against that RF Radiation being emitted by wireless devices. You can simply plug in a Graham-Stetzer Filter into an electrical outlet on those circuits. Because of this ability wired smart devices are by far the safest way to design a smart system.)

How A Smart Home Works

A smart home means that you you can control and/or automate all or many of the electrical devices in your home from a central control panel or from a computer, tablet or smartphone.

A simple way to think about a smart home is you basically set up a computer network in your home. The network is run by a central controller that connects to each electronic device in your home. And in a smart home more things are electronic, such as light switches, than in a typical home.

Then this central controller controls turning on and controlling all of the electrical devices attached to it. Software is installed with a simple control dashboard or panel so the home owner can automate or manually control each of these devices in a very simple and convenient way. This dashboard exists on a central control panel in the home, as well as by a home computer, tablet and smart phone.

Okay now let’s look at each part of a basic smart home, and talk about what is the safest ways are to do the different things smart homes are designed to do. We already spoke a bit about the brains of the system, the controller.

A controller is basically a computer that can be set up to communicate with each of the devices. Since this is a computer it is connected to the internet. This device itself is not wireless, unless a wireless feature is added to it, so it does not emit RF Radiation.

A security system is to ring an alarm when someone is attempting to break in, and to film the interior and/or exterior of the home. Motion sensors are infrared and detect heat, and do not give off RF Radiation. So again you can have a completely hard wired security system connected to your controller.

WiFi thermostats are all the rage of late. The problem is they emit a ton of RF Radiation. They are one of the higher RF Radiation emitting devices you can have in your home. And there really is no need for them. A standard digital thermostat can be set to have different temperatures at different times of the day. Some even have vacation modes that you can set when you leave town, and for a specific number of days.

Also many heating and air conditioning companies recommend that you not change your temperature too often. They say that it can cause spikes in your heating bill and is not good for the system. They recommend to set your temperature on a schedule with a digital system and forget about it. Let it run on its schedule. 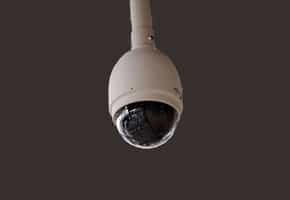 We talked a bit about cameras earlier in the security system section of this article. Intercoms and cameras all can be hard wired. There is no reason for them to be wireless. I have even seen aftermarket wired  intercom and camera systems that can be installed in different rooms in the home, with no need for WiFi whatsoever. And they were relatively easy to install and looked very professional.

This can also be done to create a baby monitoring system so that you don’t need a baby monitor. The wireless baby monitors emit worse levels of RF Radiation than even a WiFi thermostat. Anything you can do to avoid a microwave emitting device blasting your baby is worth the money and effort. They are so dangerous.

In a smart home one of the most RF Radiation emitting things you can include are smart light bulbs. I would say just don’t do it. They are wireless with either WiFi or Bluetooth. And they emit a lot of RF Radiation. They are bad news. And there is no way to get a metal mesh shield to protect yourself from the RF Radiation. And if you could figure out a way it would look tacky.

Many smart light bulbs also create massive amounts of Dirty Electricity on your electrical circuits. And in rooms that have a lot of these light bulbs, a filter by itself is sometimes not enough to lower the emissions down to safe levels.

And you do not even really need smart light bulbs. Smart light switches will do everything that your smart light bulbs will do, and they can be hard wired instead of WiFi or Bluetooth. So then all you need is a Graham-Stetzer Filter to reduce the Dirty Electricity they cause down to safe levels.

The idea behind smart appliances is that you can control them remotely from your central control dashboard, computer, tablet or smartphone. And a smart appliance will communicate with your home network and tell you things like when your clothes dry cycle is done. This allows you to start, stop and check on the appliance remotely.

The problem is that the push is to connect all of these appliances to your network via Bluetooth or WiFi. If you do then basically every electronic device in your home, from your blender to your sprinkler system control box, would emit significant amounts of RF Radiation.

Your whole house would be bathing in RF Radiation at high levels. Most manufactures of smart devices give you both the option of controlling them by WiFi or Bluetooth, or plugging your appliance directly into your smart network via an Ethernet cable. The Ethernet cable is the way you want to go. Then you will want to go into your appliance settings and turn off the Bluetooth or WiFi.

If you are setting up your home as a smart home, the best rule of thumb is to hard wire everything. When you are designing your kitchen it is important to keep this in mind. If it cannot be connected through wiring, then I would not have it as part of my smart system. Then you can have all of the convenience and fun of having a smart home, without exposing your family to the carcinogenic RF Radiation.

Reducing RF Radiation In Your Home

Besides being careful not to have any part of your smart network WiFi emitting, it is important to go through the rest of your house and test to see if any devices you already have are emitting RF Radiation.

Some obvious examples of things you may have that will be would be things such as smart meters (electric, gas and water), a cordless phone, baby monitor, and a WiFi router. I filmed myself going room by room through a home testing for devices like that, then I describe how I would fix each RF Radiation problem I found. You can watch these videos on the “How To Test For RF Radiation” page on this website.

I will show just one of these videos here in this article. This below video shows me testing how much RF Radiation is emitted by my 5 GHz WiFi router. Then I put the router into a device called a “WiFi Router Guard” which is a steel mesh box that blocks 90% to 95% of the RF Radiation emitted from the router. And the amazing part is my WiFi still works. This video is definitely worth watching. I highly recommend it.

Reducing The Dirty Electricity In Your Home

Like I said earlier in this article it is much better to design a smart home where everything is hard wired in, even though it creates Dirty Electricity, because you can reduce that. Having your whole home filled with WiFi or Bluetooth emitting devices is much harder to protect against. You can’t stick your WiFi thermostat in a WiFi Router Guard for example to protect you from the RF Radiation.

In the below video I test a circuit in my kitchen that reads a little bit over the safety level, and then I correct it by inserting a filter and test it again. In the video you can see how much it reduced the problem. Again this video is short but very much worth watching. I highly recommend it.

I guess the two main points I am hoping people get out of this article is 1. that RF Radiation has extensive scientific studies done on it and it really is very harmful, and 2. we can still have our neat gadgets, and even a smart home, if we just think it through and make good decisions in the process. I hope this video is helpful and benefits you.

Related article: How To Protect Yourself From RF or EMF Radiation