If you have a smart meter installed on your home, are you sure your privacy is safe? Your power company may be collecting a lot more data about you and your family than you think.

Smart meters are a real privacy concern nowadays. Through your smart meter your power company can track things like how many people are typically home at certain times of the day and your family’s sleeping and eating schedules. They even know when a home is vacant, who has high-priced appliances, and who has a security system!

Police officials can get information to identify suspicious or illegal behavior. Police can also find out if someone was home on the night of an alleged crime. Since smart meters are computers, there is also the possibility of someone hacking it and accessing that information. With all of that being said, is it possible that this information could be used in a bad way? 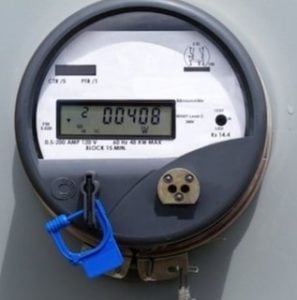 These high tech meters send information back and forth from your home to the power company thousands of times a day.  According to Smart Grid Awareness.org “Credible government reports and security experts have explained that there are privacy concerns that the granular data collected by smart meters will reveal the activities of people inside of a home”… Furthermore, there is deep concern that inadequate cyber security measures surrounding the digital transmission of smart meter data will expose such data to misuse by authorized and unauthorized users of the data.”

So, who cares? I mean, do people really want to know when I bake an apple pie? No, they don’t care about the apple pie.  Although, a slice sounds pretty good right about now.  But I digress. The data collected can be used in a number of ways.  If the power company know when you’re home, they also know when you’re away. Hmmm.  The Electronic Privacy Information Center created this shocking list of possible dangers of smart meter data landing in the wrong hands: “Identity theft, determine personal behavior patterns, determine specific appliance used, performing real time surveillance’s, targeted home invasions, decisions and actions based upon inaccurate data, profiling, unwanted publicity and embarrassment, tracking behaviors of renters.”

A smart meter can do all that? You bet.  “Hypothetically, a landlord could use information obtained from a smart meter to determine whether a tenant had broken a lease provision or for other more malicious purposes,”- EPIC. 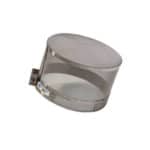 In the below video I test something called a Smart Meter Guard. It is something you can put over a smart meter and it will block 90% to 95% of the RF Radiation smart meters emit. In the video I take my High Frequency Analyzer and test my digital meter so you can see how much RF Radiation it emits. Then I put a Smart Meter Guard on it and test it again so you can see that it does block the RF Radiation. It is a short video but definitely worth watching. I highly recommend it!

Some power companies in some areas of the United States offer smart meter opt out programs for a small monthly fee. If your power company will do this they will replace your smart meter with an analog meter that will not collect any information other than measure the amount power used each month so that the power company knows how much to charge you.

Most power companies did not have opt out programs when they first started installing smart meters. But when enough of their customer began complaining then they implemented one. If your power company does not currently offer an opt out program, if you can rally enough people to complain and request one, you might be able to make it happen.

But, isn’t this data protected? Certainly there are firewalls and safety measures in place to protect my energy use data.  There are safety measures in place, but it’s not fail proof.  In fact, all this transmission of data and the smart grid are extremely vulnerable to cyber hacks and terrorism, not to mention hackers. Some national security and cyber terrorism experts warn a single virus could cause blackouts across the country.

According to Security Week, an online publication, smart meters are exceptionally vulnerable to cyber attacks.  “According to the expert, a malicious actor who manages to hack a smart meter could obtain information on the targeted user’s power consumption and potentially determine when the victim is home, or they could inflate the electricity bill. . . Even more worrying is that since smart meters can communicate with all the smart devices in the consumer’s home, an attacker could hijack those systems, including smart door locks.

The expert also believes an attacker could cause a meter to explode by make modifications to the software running on the device.” So let me get this straight.  A smart meter makes me vulnerable to a home invasion, a house fire and identity theft.  I’m starting to think this smart meter isn’t exactly the most intelligent solution to providing a more accurate energy bill.

Smart meters not only make your vulnerable to a whole host of problems, it also makes you a target for advertising companies.  According to cybercrime analyst, Nigel Phair, smart meters can use the data collected and in real time determine if you’re watching television.  This is where the ad companies come in.

“By cracking smart electricity meters, hackers can monitor in real time activity, such as when the television is on, and even what program is being shown on the TV by monitoring the power required for each scene. This information could be sold to advertisers,” said Nigel Phair.  Okay. I’ve had enough. That’s a little too much information if you ask me.

There are so many privacy concerns several energy companies across the country and world have been the target of lawsuits.  In Vermont, the ACLU has publicly challenged utility companies about how smart meter data is collected and used.  “The group say that one major issue with data collected from the meters is the same with cell phone data.  The agency has filed lawsuits against law enforcement agencies in the state over cell phone data being harvested through secret inquests and used to track an individual’s whereabouts.

The group has suggested a proposal to the state government so the same won’t happen with smart meter data,” Fox News, 2014.  That same report alleges the U.S. government knew about privacy and data concerns almost a decade ago.   “Advances in Smart Grid technology could significantly increase the amount of potentially available information about personal energy consumption…this report recommends that states should consider a condition in which customers can authorize third party access and that there should be a prohibition on disclosure of customer data to said third parties,” Fox News, 2014.

It’s clear, smart meters have the ability to expose you and your family to a whole of host of problems.  Once the data leaves your home, who know where it will end up.  More needs to be done to protect consumers across the country.  Some power companies allow consumers the option to opt out of the smart meter program.   For a small fee, the power company will replace your smart meter with an analog meter.  Oh, and I’d move your couch over to the big window.  I think it will really add dimension to your space.

To find out more about the dangers of smart meters check out our article Are Smart Meters Really Dangerous?.  To learn how you can protect your family from the radiation of a smart meter on your home if you can’t get the power company to remove it see Smart Meter Guard Product Review. In my article entitled “The 7 Worst Radiation Dangers In Your Home” I discuss the health risks smart meters expose us to.