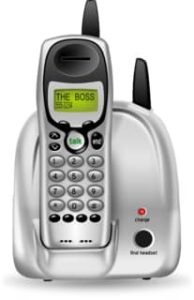 In this article we are going to talk about cordless phones and how safe (or unsafe) they actually are. For some reason people think of their cell phones and WiFi routers emitting radiation, but they don’t even think about their cordless phones.

Cordless phones emit something called Radio Frequency (RF) Radiation. This is the most powerful and dangerous type of EMF Radiation. There are hundreds of peer reviewed scientific studies linking this radiation to things like crib death, cancer, DNA Damage (especially in infants and fetuses) and infertility. Even the World Health Organization was finally forced to list this as a “possible carcinogen” in 2011.

In the below video I actually test the radiation coming out of a cordless phone so that you can see how much and how powerful it is. This video is short and very much worth watching. Seeing is believing. You will be convinced that you don’t want a cordless phone. My advice is throw them away. You don’t want to give them even to an enemy. They are bad news. If you must have a land line phone, get a corded phone. They make some amazing ones.

For places where a corded phone is not practical, a cell phone is much better than a cordless phone. And their are ways block the radiation of a cell phone. For a short video showing ways to protect yourself from cell phone radiation click this link. To see the items that help protect you from cell phone and other in home RF Radiation emitting items see the Recommended Protections page of this website. I list the links there to the best places to get them too.

That’s because the phone and the base are sending radiation and signals back to each other all the time. Many believe the base of cordless phone acts just like a cell phone tower, only this one is right in your home.

“In some cases cordless phones are more dangerous than cell phones.  Most cordless phones use DECT (Digital European Cordless Telephone) technology. The handset and the base of the phone, emit pulsed microwave radiation.  Research from Swedish scientists concludes that cordless phones raise the risk of developing cancer.

After evaluating malignant brain tumor patients’ usage of cell phones vs. their usage of cordless phones, they found the cancer risk was multiplied for those who used DECT cordless phones and combining the two made the risk even higher,” -electricsense.com

Wow.  So, a cordless phone could actually raise our risk of getting cancer?  That’s terrifying.  What does this mean for our children and other people living with compromised immune system?  There’s no one better to ask than Dr. Magda Havas, a well known doctor who has researched the health effects of cordless phones in humans.

“Dr. Magda Havas is one of the premier researchers on the adverse impact of DECT phones. In a petition calling on the Canadian government to ban DECT phones, Dr. Havas points to the growing evidence linking DECT phones with ill health.  By superimposing her studies with others, Dr. Havas created the following graphic to show that, even from a distance of 3 meters, EEG brain waves are altered.  At 2.8 meters motor function, memory and attention of children are affected. At 1.7 meters, sleep is disturbed. How many people have DECT phones near their bed?

At 30 cm memory is impaired and at closer distances the immune system is affected, REM sleep is reduced, insulin levels drop, and there are pathological changes in the blood brain barrier. Studies also show that there is 100% increase in adult leukemia between 45 and 130 cm from the phone and a similar increase in childhood leukemia between 35 and 260 cm.”

Replace your cordless phone with a landline

If that’s not enough to convince you to replace your cordless phone with a landline, I’m not sure what will.  And if you have a pacemaker, you will want to take notice.  According to Boston Scientific, you do not want to put the cordless phone directly over your heart, because the signals and radiation could throw off the rhythm of your heart.  If you have cell phone or Bluetooth device, they should be kept at least six inches away from your pacemaker at all times.

“All items that use electricity or transmit wireless signals have invisible electromagnetic fields around them that may temporarily interfere with your pacemaker’s normal operation. This is called electromagnetic interference, or EMI for short.  Your pacemaker has built-in features that protect it from EMI from most household items. However, some items must be kept a certain distance from your pacemaker. And others, should not be used at all,” Boston Scientific.

It’s hard to believe, given the associated risks, cordless phones continue to be sold across the globe. The U.S. government will tell you the radiation from these devices is perfectly safe. But, the truth is cordless phone radiation put you and your family at risk for developing major health problems.  In my research, I came across an interesting article by Dr. Stephen Sinatra, a well known and respected cardiologist.  Dr. Sinatra believes cell phones and cordless phones are just as dangerous to our health as smoking cigarettes.

“I’ll tell you to get wireless phone out of your home as well.  Cordless phones are like having a cell tower in your home—and we know how dangerous cell towers are. I’ve said this many times before, but it’s a warning we all need to heed if cell phones cause cancer. . . Cigarette manufacturers pushed back for three decades, saying smoking doesn’t cause lung cancer. Do we want to wait 30 years to find out just how pervasive the carcinogenic dangers from cell phones really are”? said Dr. Stephen Sinatra.

So, what are you supposed to do? Don’t start training pigeons to deliver messages just yet.  If you can, replace your old cordless phone, with a eco cordless phones that emits less radiation than the one you’re probably using now.  A low-radiation phone, still emits some level of radiation, and I’m not sure I’m comfortable with any exposure right now.

If you can’t afford to make any upgrades, some experts recommend unplugging the base of your phone at night to reduce radiation exposure while you sleep.  Your best option? Toss out that cordless phone all together and go for an old-school landline phone.  You know the one with the long yellow cord that gets all tangled around when you try to make a phone call? Yep.  That one.  And yes, they still sell them.

So the bottom line here is that the best thing to do is 1. throw your cordless phone in the garbage and buy a corded landline phone. They have some really nice ones with a lot of features and they don’t emit any RF Radiation. 2. Get rid of your landline altogether and just use your cellphone. Or 3. buy an Eco-Mode phone. See our article “12 Examples Of Eco Mode & Analog Cordless Phones“. The one thing that you do not want to do is to continue living with all of the RF Radiation that your cordless phone, and any handsets you have, emit.  The health of you and your family will be grateful if you do so.