Before you go, check out "How To Protect Yourself From Cellphone Radiation!"

Learn how to protect your family from these dangers! 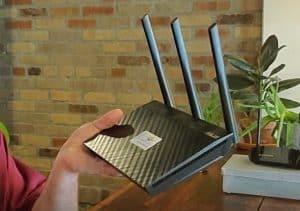 Often people live in a home that was not pre-wired with Ethernet cables sending WiFi to each room of the house. And it can be expensive to wire a home after the fact. So unfortunately people end up needing to have a WiFi router in their home to give them access to the internet.

A few months ago I was contacted by a company called JRS Eco Wireless out of Europe asking me if I was willing to do a test and review of their “low EMF wireless router”. They call it the JRS Eco 100 5 GHz Wireless Router. As I always do I happily agreed as long as they understood that even though they were going to send it to me for free, I would only give my honest opinion of it. They said that is what they wanted, so they agreed and sent me the router.

So the purpose of this article is to review this router. In the first two thirds of this article (which includes the below video) I talk about what I found upon my initial test. At that point I pretty much loved everything about it that I tried. But after switching exclusively to this router for about 4 weeks, I found a few things I do not like about it as well. So I will discuss those negatives towards the end of this article.

Below is the video review I did of the JRS Eco 100 5 GHz Wireless Router. In it I test the RF Radiation of the router and explain what makes it low EMF. If you are considering getting a JRS Eco 100 I think it is important to both watch the below video, as well as read the rest of this article. I go over details in this article I don’t include in the video.

Okay hopefully you have watched that video now. Alright lets get into the rest of my written review on this router. First lets discuss what exactly the JRS Eco 100 5 GHz Wireless Router is. 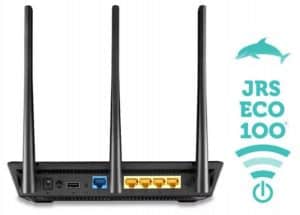 This is a 5 GHz WiFi router made by a company called ASUS. The model I have is the RT-AC66U Wireless-AC1750. And it has the JRS Eco 100 WiFi firmware installed on it. You can either buy just the firmware and install it on your own ASUS RT-AC66U Wireless-AC1750, or JRS Eco Wireless company will sell you the ASUS router with the firmware already installed. Just remember that this ASUS router model is not low EMF by itself. You have to get the firmware from the JRS Eco Wireless company first, and install it on the router (which I am told takes about 10 minutes).

What I Found When I Tested The Router 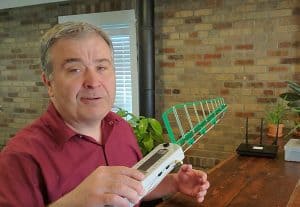 The first thing I did was set up both the JRS Eco 100 5 GHz Wireless Router as well as my Netgear 5 GHz WiFi router one at a time so that I could compare the two. As you may have seen before if you have seen my previous videos testing my Netgear router, it not only maxes out my meter (I used my  HF 35C High Frequency Analyzer), but it makes the meter sound like a machine gun because it emits the RF Radiation so fast. (I show this in the above video.)

It was like a night and day difference testing the JRS Eco 100 Wireless Router with my meter. Instead of sounding like a machine gun it sounded more like a bolt action rifle where there is some time in between shots because you have to load another cartridge into the barrel each time. In other words instead of sounding like “d,d,d,d,d,d,d,d”, or a bunch of sounds in imediate succession, the JRS Eco 100 5 GHz Wireless Router sounded more like “d………d………..d………d”, if that makes any sense.

There was a huge difference in the way they sounded. You could tell by the sound alone that the JRS Low EMF router was emitting its blasts of RF Radiation a lot less often. It would still max out my meter, which means it was still emitting more than 2,000 micro-watts per meter squared. But it sounded like it was sending those blasts out every few seconds instead of multiple times per second. You will see what I am talking about if you watch my above video!

So in other words everyone should be turning off the WiFi of any devices they are not currently using the internet on, for example when you go to sleep at night. (Any device you forget to leave the WiFi running is blasting you with RF Radiation when it does not have to be.) When you turn off the WiFi from your devices so that none are connected to the router’s WiFi, the JRS Eco 100 5 GHz Wireless Router stops emitting any RF Radiation.

I hope that makes sense! I demonstrate this and even test it with a meter in my above video! Its a great feature!

How Does The Internet Speed Compare? 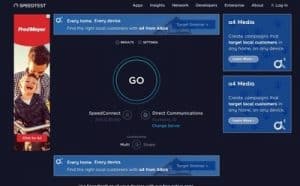 This part was really surprising to me. In the above video I tested both my Netgear 5 GHz router and the JRS Eco 100 5 GHz Wireless Router on speedtest.net. Both showed exactly the same download and upload speeds. And then I put my Netgear router in a Wifi Router Guard, and again the speeds were identical. I really thought that both my Negear router in a WiFi Router Guard, and the JRS Eco 100 would be slower. But as you can see in the above video, they were all pretty much the same.

In fact according to an email I received from the manufacturer the maximum speeds are “2.4 GHz = max. 150 – 200 Mbps and 5 GHz = max. 350 – 450 Mbps”. And he said “that’s real measured speed, not theoretical figures like AC1900”. “The Eco functionality does not limit the speed and the firmware is capable of 450+ Megabits per second WiFi throughput.”

I was not able to show speeds like that in the above video because my personal internet is so ridiculously slow here in the part of town where I live. But the manufacturer said that this router is capable of those speeds. Again it performed just as fast as my Netgear 5 GHz router. 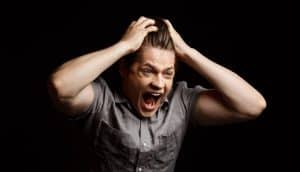 Let my preface the things I am about to tell you by saying that I have really slow internet at my home to begin with. My service (as you saw in the above video) is about 10 Mbps download, and I usually actually get about half that. I am used to 100 Mbps so it has been an adjustment. So I imagine what I am about to say would be less of a problem if I was able to get higher speeds at this house.

What I found was that as soon as I switched the router to Eco-Mode, my devices started having trouble finding and connecting to the router. If no devices are connected to the router’s WiFi, it does not show up as an available WiFi source when my devices scan for WiFi.

So for example, if I am downstairs in my living room and I need to connect to WiFi, I have to first go to my office and connect my laptop. Then I can come back down and connect with any other device I was trying to use. It is quite annoying.

I have noticed a significant reduction in speed using the JRS Eco 100 5 GHz Router vrs using my Netgear 5 GHz Router. In the video I tested it from my office (the closest room to the router), and the speeds were identical. But from other parts of the house my WiFi is so slow I can’t function using the JRS Eco 100. I finally just got tired of it and switched back to my Netgear router in my Wifi Router Guard.

Again, if you have 50 Mbps internet, you probably won’t have the problems I am having. I have slow internet to begin with. But this is what my experience has been.

Do I Need A WiFi Router Guard With The JRS Eco 100? 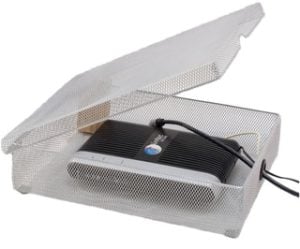 In my personal opinion yes. Even if you have faster internet than I do, and the JRS Eco 100 5 GHz Wireless Router works well for you, it still emits over 2,000 micro-watts per meter squared when on. It sends out the radiation blasts much less often, but they still go out.

Having any router in a WiFi Router Guard will pretty much stop all significant RF Radiation within about 6 to 10 feet of the router without lowering the WiFi speed significantly (according to my testing).

(Note: I did receive a note from the manufacture that read as follows: “By the way, you can reduce the emitted microwatts per square meter, by using the Tx power adjustment setting on the JRS tab on the Wireless page. Our firmware has a 1mW adjustable transmit power setting, that you can reduce down to 4 mW, both for 2.4 and 5 GHz. This should give you a 10 times reduction in micro-watts per square meter compared to the default setting of 42 mW.”  I will add the results in this article once I test this to see if it slows the router speed down at all or not.) 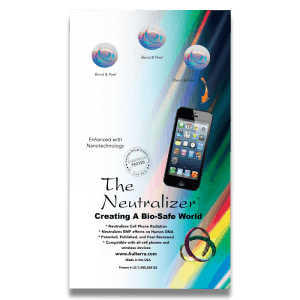 And I also put some Aulterra Neutralizer Stickers on my JRS Eco 100 5 GHz Wireless Router as well. When you have read as many scientific studies on this topic as I have, you want to not only block as much of the RF Radiation from hitting you as possible, but you want to change its form with the Aulterra stickers to being more natural and less harmful as well.

Truthfully do something. Any of the options I listed above will greatly reduce your exposure. If you can’t afford to do all like I have, then do at least one of the three.

Well I appreciate you taking the time to read clear to the end of this article. If you feel you have gotten any benefit at all out of this please post it on your social media and email it to your friends and family. We really do appreciate it when you guys are willing to do that because it helps us spread the word.

link to Does Fitbit Emit EMF Radiation?- Get The Facts!

A very popular type of devices today are products like the Fitbit Smart Watch and Fitbit Tracker. The idea behind them is they help us stay healthy by monitoring...

Continue Reading
link to How To Protect Yourself From WiFi Radiation - A Helpful Guide!