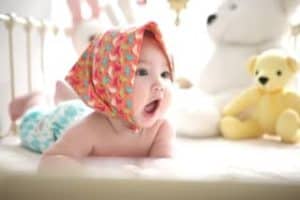 Still it is important to keep any baby monitor, including voice activated ones, as far away from your baby’s body as functionality will allow. RF Radiation dissipates with distance. So the farther away it is, the safer it will be to your child.

What Makes A Baby Monitor Unsafe

“Analog monitors that use the FM radio band, usually 40 MHz are considered to be safer than digital monitors that transmit via Bluetooth, WiFi -2.4 Ghazi or DECT.  We as a society grew up with AM and FM radio frequencies and for the most part our bodies have adapted to these frequencies if they are low intensity.

The newer pulsing digital frequencies from Bluetooth, WiFi and DECT technology have now been proven beyond doubt to be highly biologically active to the human body. In 2011 the IARC (the cancer division of the WHO) declared that all radio frequencies are a “possible” cause of cancer, so I strongly suggest that you especially refrain from using audio and video baby monitors that use WiFi or DECT.

The high intensity digital aspects of these frequencies and the transmission technology require them to constantly emit microwave to function. This chronic radiation comes from both the baby and the remote monitor. I especially warn you to stay away from wearable baby monitors that use Bluetooth (a form of Wi-Fi) because the transmitter is placed right against the body and therefore the radiation will be absorbed into the skin,” Dr. Magda Havas.

Dr. Magda Havas is a leading expert in the field of radiation and its health implications on infants and children.  On her website, Dr. Havas strongly urges parents to keep digital baby monitors out of the nursery.  As she mentioned earlier, analog monitors constantly emit radiation too, just at a lower level.  Dr. Havas says if you absolutely can not do without a baby monitor, A voice activated baby monitor is a safer option.  Here’s why:

“Ideally, the baby monitor base station transmitter should be voice-activated, meaning that it transmits radiation as sound only when it senses a sound from the baby. This would reduce the microwave exposure of both infant and parent. However, not all voice-activated baby monitors are alike. This is where is gets confusing.  Voice-activation mode is very different on different monitors. Some cut the radiation that is broadcast – some just cut “squelch” the unwanted noise in the receiver.

Most baby monitors in North America are now constantly emitting microwave radiation because the companies are offering a great variety of features that the parents “think” they require.  Things like video require high intensity WiFi transmissions but are also prone to hackers,” Dr. Magda Havas.

Why Voice Activated Is Safer

Obviously by far the safest choice is not using a baby monitor at all. For those who will use one anyway, the best is about a decade old analog baby monitor. Why one so old? Because they used lower frequencies then, but they had less features. The lower the frequency the safer. Every year companies are only offering analog monitors with higher and higher frequencies. Safe ones are getting really hard to find.

The next best option would be a digital monitor (the lower the frequency the better) that has the optional “Eco-Mode” setting. This allows the monitor to only emit radiation when activated by sound or motion. I show some of these Eco-Mode and analog monitors in For examples of lower radiation emission baby monitors please see our article entitled 7 Examples of Low Emission Baby Monitors. I also show some on the Recommended Protections page of this website.

“One monitor that I highly recommend if you are considering the health effects of the baby monitor is the Blue Angel approved Hartig and Helling MBF 3333 baby monitor. It operates on the safer 40 Mhz analog radio band and most importantly – it is voice activated. It only emits radiation when the voice reaches a certain level. The transformers to recharge the batteries are also low EMF.

The problem we face is this monitor is not sold in stores in the US or Canada but the good news is you could buy the monitor online on Amazon.de in Germany –  Except last time I checked they were no longer available. If you can find where to import them from Germany, you will need to purchase the right wall plug adapters for Europe to North America. The transformer’s voltage is 110/220 so it works everywhere in the world,” Dr. Magda Havas.

So, if you can’t get your hands on the Hartig or Helling baby monitors, take a look at the BabyMoov Expert Care.  This voice activated baby monitor is digital, which means it still emits high levels of radiation for shorter periods of time.  To reduce that exposure, try a WiFi Router Guard.  You can put the baby monitor in the guard, which is made of metal, and you can prevent 90-95% of the radiation from entering your nursery and home.

The only downside is you won’t have the same range as its advertised. I think this particular model has a range of 2100 feet or so.  If you have a large home, this may not work for you.  But, it’s better than nothing.  Even though voice activated baby monitors are a safer option than digital and analog, they still emit some level of radiation.  Until we know more, you may just need to check on your child with your own two eyes.