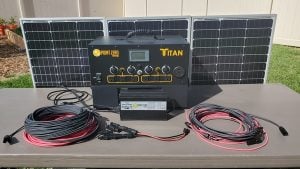 I know this topic does not fit perfectly within the general theme of this website, but I am really excited about the Titan Solar Generator and wanted to share it with you all.

In the below video I test the Titan Solar Generator at my home and show you how powerful it is. I also show you how to setup the solar panels. And I also plug in and run a bunch of electronic devices so that you can get a feel for what capacity this generator would have during a power outage. In this video I introduce myself as David from EmergencyPrepGuy.com, which is one of my other websites.

I am going to go over most of the details you will want to know about this generator in the rest of this article. If however you want to see more specific specifications on the Titan Solar Generator, you can find it at this website PoweredPortableSolar.com.

Every year it seems there are storms all over the country (and world) that cause people to lose power in their homes, sometimes for weeks at a time. Even in states that don’t often get hurricanes or tornadoes, many get ice storms, earthquakes or forest fires. All of these dangers can knock power grids out.

In a more extreme scenario if war ever breaks out in your country, things like an EMP or other types of bombing would possibly leave areas without power for months, or even years. I am not trying to be Mr. doom and gloom. All I am saying is it is better to be prepared and never need it than to need it and not be prepared.

I am one that believes if you can afford it you should also have a small propane or gasoline backup generator as well such as this Yamaha EF3000iS. That way if sunshine is in short supply you can charge your Titan in 3 or 4 hours, and run the rest of the day on your Titan. However if you had to choose between one or the other, my personal opinion is I would go with the solar option.

Titan Vs DIY Solar Systems – Which Is Cheaper?

Will Prouse did a good little video here comparing the price of the Titan Solar Generator basic system to a do it yourself system so that you can see which is less expensive. I think his results are worth taking a minute to watch his video.

How Many Devices Will The Titan Run? 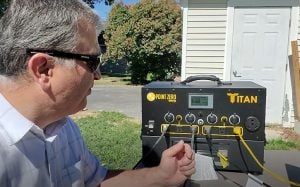 This is a great question. The whole point of having a backup generator is so that you can run enough to stay comfortable during an extended power outage. The good news is right now the Titan is the most powerful portable solar backup generator on the market. With two batteries this generator can have enough devices plugged into it to draw up to a maximum of 3,000 watts at one time.

To put this into perspective when I plugged my refrigerator into it, it used between 15 to 50 watts to run, depending on weather the refrigerator motor was running at that moment or not. My freezer used about the same. A 60 watt light bulb uses 60 watts to run. If you had a more efficient light bulb than a 60 watt, then obviously it would draw less power.

My laptop only used about 15 watts to run. My cell phone and tablet both drew about 10 to 14 watts each to charge. I plugged in a very large space heater and it drew 1600 watts, and my skill saw used about 850 watts.

So if you avoid using things like space heaters, and skill saws during an emergency, you could easily run all of your essential devices during an emergency without even coming close to maxing out this system. See this video below where Ben demonstrates how he uses the Titan Solar Generator to run his family’s off grid cabin for days at a time.

Another thing to keep in mind while planning what you can run on this system is watt hours. A watt hour is the energy it would take to run a device that draws 1 watt for an hour. Each of the Titan batteries will run 2,000 watt hours before being run out. So while you theoretically could run enough devices to draw a full 2,000 watts, the battery would then only last for one hour.

Charging While Using The Titan

Remember with the Titan you can have your solar panels up and charging the system while you are using it (during the day). So if you have 10 of the 100 watt solar panels charging at full capacity (during peak sunshine), then you have 1,000 watts being put into the system offsetting the power that you are using. If you are using less than 1,000 watts in this example you would actually be charging the battery instead of draining it while using it. Hopefully that makes sense.

The Front Of The Titan 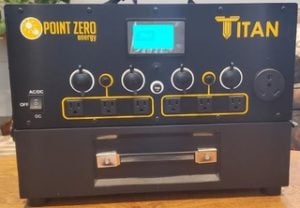 When looking at the front of the Titan Solar Generator, you can see that there are two parts. The power module is the top part with the 120 volt AC outlets on the front of it, and the section below that with the handle is the battery. The titan will allow you to add pretty much as many batteries as you would like, the more you add, the taller the unit will be.

Inside the power module is the 3,000 watt inverter we spoke about earlier. You can see on the left is a 3-way power up switch. In the middle the unit is off. When turned up both the AC ports and the DC ports are live with power. When the switch is all the way down only the DC ports are live.

The DC ports are the 4 round ports that look like car cigarette lighters. The unit comes with 4 adapters that insert into these DC ports that have both USB-A and USB-C ports in them. You can take the adapter out as well and plug in devices designed to plug into a car cigarette lighter as well. The 4 DC ports combined allow you to draw up to 20 amps. If you accidentally go above that and you overload the DC bank, you can reset them with the button in the center just above them.

Just below the DC ports are two banks of 3 AC 120 volt outlets that you can plug things into just like you would the outlets on the wall of your home. You can also plug extension cords into them that have more outlets so that you can plug more devices into each bank. Your only limitation is that each bank of 3 AC outlets on the Titan is limited to 15 amps. So you can plug as many devices into each one as you want as long as you don’t exceed 15 amps per side. If you accidentally overload the system there is a reset button over each bank of AC outlets.

On the far right is an RV plug for powering up your RV. This plug allows you to draw up to 30 amps which is currently the best on the market. Above center of both the AC and DC ports is a reset button that resets all of them including the RV port.

Along the bottom of the screen it shows the volts, amps and watts you are using. The watts number where I am pointing my finger is a net number. In other words if you are charging more watts than you are using, that number will subtract the power coming in from the power going out and give you a negative number. If you are using more power than coming in by charging it will still do the math and show you the difference as a positive number. It is a really handy display screen.

Charging Port Side Of Titan

And finally on the far right is a port that allows you to attach other batteries that you may have that you have on hand from other systems. They have to have the same voltage and be compatible with this system. If they are, then you can attach your extra batteries through this port.

Hooking Up The Solar Panels 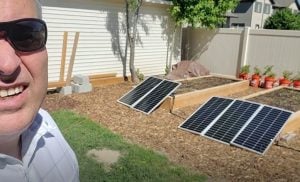 The solar panels that come with the Titan Solar Generator are high efficient 100 watt panels. What this means is at maximum sun when they are charging at full capacity each of these panels will produce 100 watts of power consistently. The titan can expand up to 20 of these panels.

On the back of each panel there are two cords. One has a male end and the other has a female end. You simply hook of the female end of one panel to the male end of the other panel, on down the line to create a series. Then when your done you will be left with one male and one female connection, each on either end of your series of panels. You then connect a cord to each of those and then into a wire that connects to the Titan. If there is sun hitting your panels, you are then charging the Titan. It is very simple.

If you have a south facing side of your house that you can lean the panels up against, you might not need a solar panel stand. However since the sun moves having a stand will help you maximize whatever sun is available at any given time. This could be very important in an emergency when you are depending on your solar generator for power.

In this below video it shows a simple inexpensive way to build a strong but light weight stand that will do a great job with these panels. Check out this video.

After spending a couple of days with the Titan Solar Generator testing it, charging it etc., I have to say I was very impressed. It is amazing to me that panels that small can produce so much power. And I was also struck by the power of the unit itself. You can run a lot of things on that generator for a long time. What a great power source to have in an emergency. It is truly amazing.

If you have benefited at all from this article, please share it on your social media sites or email it to your friends and family. We really appreciate it when our readers do that. It really helps us get the word out.

Finally if you think you might want to get one of these units, you can pick one up at PoweredPortableSolar.com. Thank you for taking the time to read this article clear to the very end! You really endured to the end! Lol! We really appreciate you doing so. Thanks again!