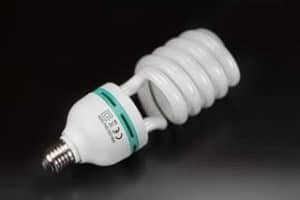 Compact fluorescent light bulbs are dangerous in that they cause electric smog or Dirty Electricity to be emitted by the electrical wiring that they are connected to. This Dirty Electricity is a form of EMF Radiation that independent peer reviewed scientific studies have linked to things like cancer, brain tumors and male infertility.

In this article first I am going to explain a bit about what Dirty Electricity is and I will show in a video how to test for and correct it. Then I will get into more about compact fluorescent light bulbs, how they work and why they cause problems.

What Is Dirty Electricity?

Dirty Electricity is irregular spikes and surges of electric energy transmitting along electrical wiring where only standard 50/60-Hz AC electricity should be. As it reaches higher frequencies some of it becomes airborne and goes through the walls into the rooms of buildings. Dirty electricity is caused most often by appliances, including things like CFL bulbs, that try to alter the normal flow of alternating electrical current in some way. There are many scientific studies that link RF Radiation to cancer. I have links to some of these studies in my article “The 7 Worst Radiation Dangers In Your Home“. Even the World Health Organization now lists RF Radiation as a possible “carcinogen“.

In the below video I take a meter and test for Dirty Electricity in one of the circuits in my home. Then I show you a simple solution that reduces the harmful radiation down to safe levels. The video is short but very much worth watching. I highly recommend it!

To understand why CFL bulbs may pose a danger to your health, you need to first understand what they are made of and how they work.  According to the Alliance for Natural Health, CFL bulbs are made with mercury, emit radiation and are a cancer risk to families.

Sounds good—until you realize that CFL bulbs contain mercury, and mercury poses a significant cancer risk. A new study shows that CFL bulbs also emit high levels of ultraviolet radiation—specifically, UVC and UVA rays. In fact, the UV rays are so strong that they can actually burn skin and skin cells.

Experts say the radiation could initiate cell death and cause skin cancer in its deadliest form—melanoma.  In every bulb the researchers tested, they found that the protective phosphor coating of the light bulb was cracked, allowing dangerous UV rays to escape, ” Alliance for Natural Health.

CFLs could cause skin cancer.  I need more information. According to an article in Scientific American, a researcher looked at the effects of CFLs on the human body after a spike in skin cancer on a farm where the members recently switched to CFLS.

“The issue comes from how CFLs are designed. Fluorescent lamps, large and compact, work by using electricity to excite mercury vapor inside the bulb. The excited vapor then emits invisible ultraviolet light that is absorbed by the bulb’s phosphor coating. In turn, the coating re-emits the energy as visible light.

Researchers explained that at close range, around a foot or so, CFL exposure is “the equivalent of sunbathing at the equator.” This may not be cause for alarm for those who have CFLs mounted in ceiling fixtures, but it should be a concern with desk or table lamps. The researchers recommend avoiding CFLs at close range and placing them behind glass barriers or enclosures,” Scientific American.

CFLs are also a common source of dirty electricity.  This type of electricity is dangerous because its been corrupted and can cause damage to our bodies at a cellular level.  Basically, theses so-called energy efficient bulbs give off enough radiation for concern. According to GreenwaveFilters.com, a website dedicated to educating consumers, dirty electricity is all around us.  According to the website, this type of pollution should be considered one of the biggest health problems of our modern day.

In my office alone, I’ve counted six light bulbs.  In my entire home, there are 24 lights, including lamps. That’s a lot of light bulbs and if they were all CFLs (they’re not) I would probably be feeling the effects, including blurred vision, headaches and nausea.  Here’s why CFL electricity is so different than other light bulbs:

Did you catch all that?  It’s pretty complicated. Basically, all those irregular currents produced by a CFL can be absorbed in our bodies.  Many doctors and scientists believe this type of dirty electricity is responsible for a rise in cancer, suicide, diabetes, sleep problems and other health issues.  Dr. Sam Milham recently wrote a book about the effects of dirty electricity on our population.   Dr. Milham believes dirty electricity is “biologically active.”

That means the electricity has the power to change our bodies on a cellular level.  Who knew a simple light bulb can cause so many problems.  Dr. Milham believes this electricity will be the root cause of premature death for thousands, if not millions over the next couple decades.  In his book, Dr. Milham links the rise in cancer among teachers at a school in California to dirty electricity.  The book also links CFLs and other sources of dirty electricity to obesity.  It’s clear, CFLs are not good for your home or your body.

So, what are we supposed to do? Give up electricity all together? Have candlelight dinner every night? While that sounds nice, the truth is we need light bulbs in our modern-day world.  If you can, replace your bulbs with halogen incandescent light bulbs  While it may take awhile to get used to the different light it produces, it will be worth it.  Do your research.

Some experts believe you should go with a cool white LED light bulb versus a warmer bulb that gives off a blue type color.  But, remember, CFLs are only one source of radiation in your home.  To truly understand the level of radiation in your home, you need a frequency analyzer.  This modern-day device will help you determine the levels of radiation coming from specific sources.  Test every room and those light bulbs.  Time to get out of the dark on this issue.

For information on the meter that allows you to measure the dirty electricity in your home please see our article entitled Graham Stetzer Microsurge Meter and Filters Review. Related Article: “How “Electromagnetic Smog” Or “Dirty Electricity” Is Created“.